Mabamba swamp is an Important Bird Area (IBA) and a Ramsar site. Over 300 bird species can be found in the wetland, including many that are globally threatened, seven of Uganda’s 12 Lake Victoria biome-restricted species, most notably the Papyrus Gonolek, and numerous wetland specialties. Throughout the year, from October to March, the wetland also plays host to large groups of Palearctic migrants. 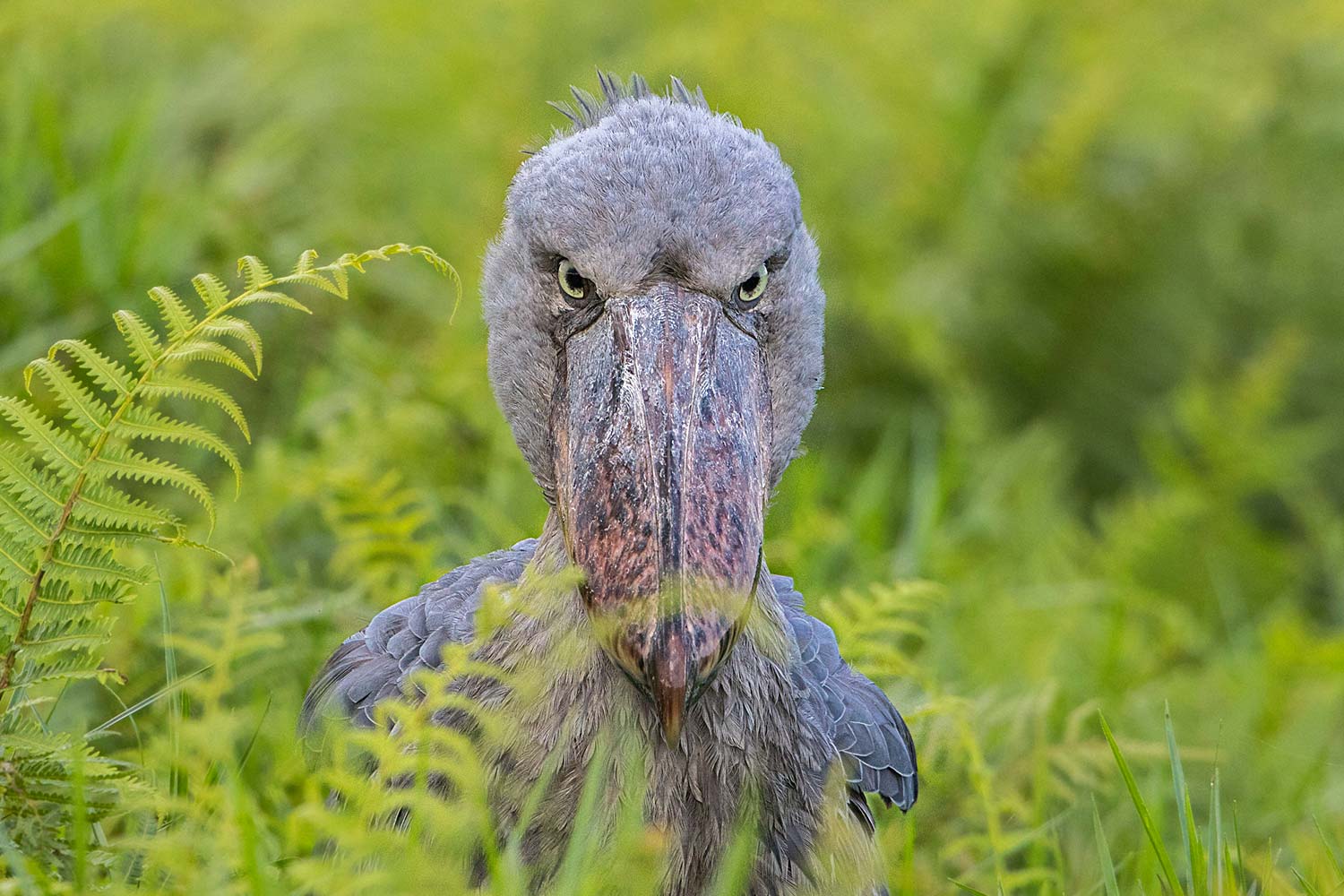 How to Get to Mabamba Swamp?

There are several ways to reach Mabamba Swamp. The easiest way to get to Mabamba from Kampala or Entebbe is via the Nakiwogo landing site in Entebbe. From there, you can take a 10-minute ferry ride to the Kasanje landing, where you can drive for about 20 minutes through open fields and crops that will attract a lot of garden birds.

The best way to observe birds in the Mabamba swamp is to go on a motorized wooden boat ride through a network of trails that wind through the thick marshes.

The Shoebill and the Fishermen in Mabamba Swamp.

The Shoebill, Uganda’s most sought-after bird, is common in the Mabamba wetland. Non-bird-watching tourists are also drawn to the Shoebill because of its unusual appearance and massive size. The Shoebill is a rare bird that only lives in a few places in Uganda, and Mabamba Swamp is the most accessible and dependable location with the best chances of seeing one in Uganda and possibly Africa.

Lungfish, which the Shoebill calls “mamba” in its native language, are abundant in Mabamba Swamp. However, the local fishermen face competition from the Shoebill because the lungfish is also one of the most sought-after fish. The fishermen had long believed that if they saw a Shoebill, also known as a “Boolwe” in the area, they would catch fewer fish that day. However, given that the Shoebill eats lungfish and the fish will hide in areas where it is active, this is not out of the question. 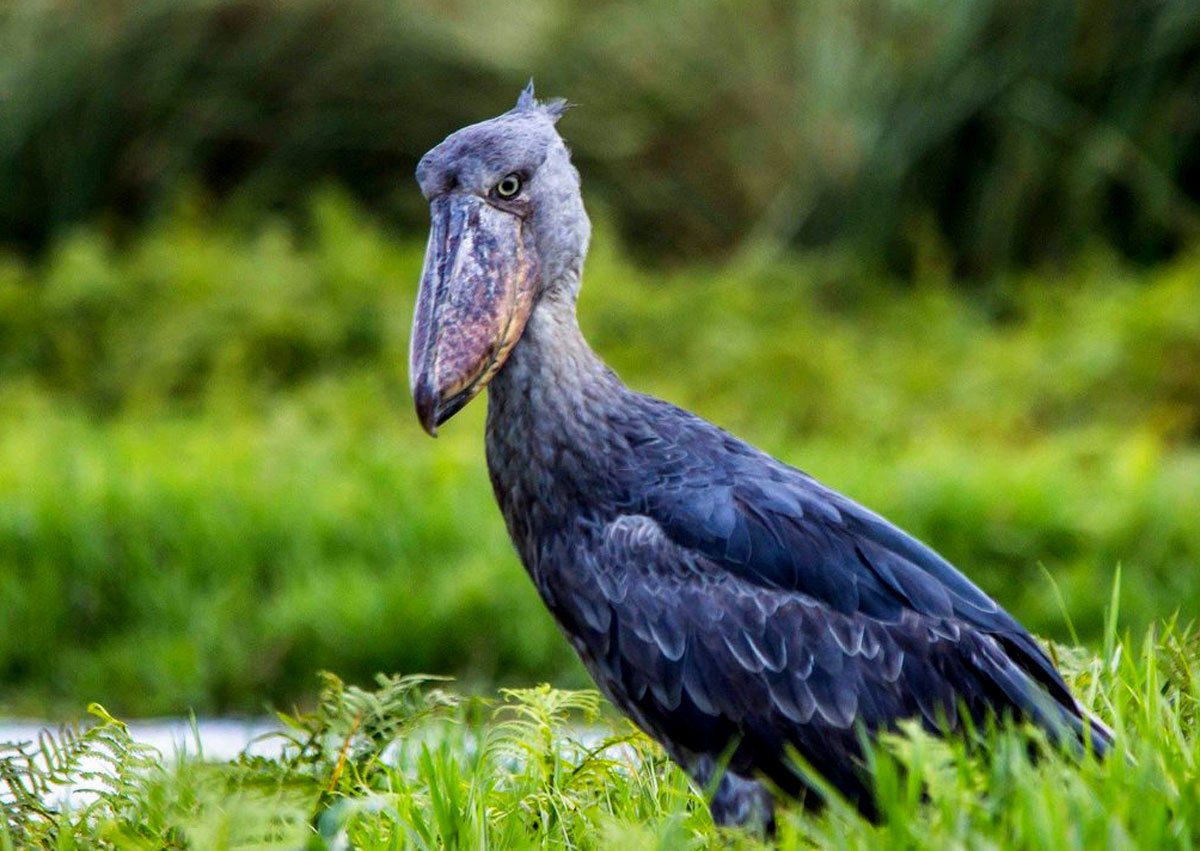 Why Are Shoebills Rare in Uganda?

The fishermen earn a lot of money by renting their boats to birdwatchers, and some of them have even received training in birding and guiding. The Shoebill is now protected by the fishermen, who will gladly tell tourists where to look for it and avoid disturbing it if they spot one while out fishing. Mabamba wetland is said to have 12 Shoebills living there.

The Shoebill is most visible in Mabamba swamp in the early morning, around 7 a.m. when there is less activity on the wetland. However, by this time, the Shoebill is also looking for its lunch fish, which it does by standing still for a long time or even hours looking out into the water and scooping it up with its big, strong, shoe-like bill, which instantly breaks the fish. 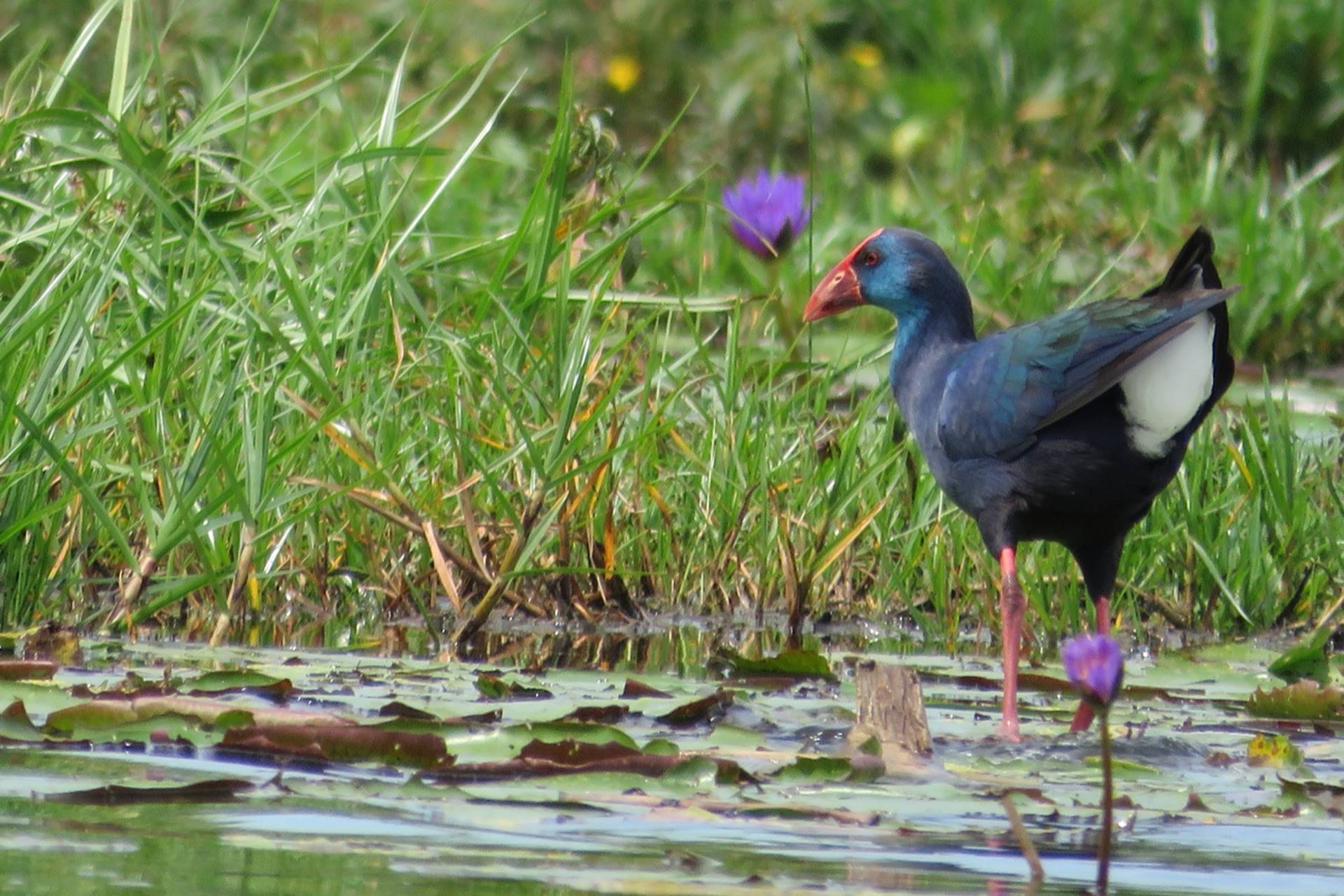 The Following Is Your Mabamba Birding Trail:

Birding around the Mabamba landing and parking area The Mabamba landing and parking area is a great place to start your wetland exploration. Numerous birds can be found in the thickets, tall trees, and shrubs, where you might just catch a rare or rare sighting. Therefore, before taking the boat trip to explore the water channels of the Mabamba wetland, you can spend a few minutes or an hour scanning the habitats.

Birding in Mabamba Swamp on a Canoe

Using a motorized wooden canoe or boat, one can observe birds in the Mabamba wetland. There are a lot of boats, and local riders are eager to take you to see the Shoebill. When you board the boat, the first bird you should look for is the Shoebill. The early-morning fishermen who go out to see what they caught in their nets sometimes share information about where they saw the Shoebill. Otherwise, it will be a game of looking for the Shoebill in the familiar grasses.

When the Shoebill is stalking lungfish, the best time to see it is in the morning. It will stand still for hours or even days before an unfortunate fish crosses its path. The Shoebill takes a break during the heat of the day by squatting in the grass and spreading its wings, making it difficult to locate. It can also be seen cooling itself by flying high in the sky. After seeing the Shoebill, continue your normal birding by wading through thick papyrus and grasses through the various water channels that lead to Lake Victoria and deep into the wetland.

Among the water birds that are hard to miss are Purple Swamphen, African Marsh Harrier, African Darter, Common Squacco Heron, Purple Heron, Long-tailed Cormorant, Northern Brown-throated Weaver, Yellow-billed Duck, Malachite Kingfisher Birding cultivations and bushland along the edge of the Mabamba wetland. The nice trail—a footpath—that runs along the wetland can round out your birding trip at Mabamba and help you add more species from the field to

You can then take this footpath, which starts on your left just before the exit, after returning from the boat ride through the Mabamba swamp. The path winds its way along the wetland, through fields and bushland, and past a sparsely planted eucalyptus tree plantation that can yield surprising woodland species. Because the trail is quite long, you can walk it for several hours until you feel like stopping.

Nkima Forest is a small patch of forest on a hill overlooking Mabamba wetlands. Common birds include the Rufous-napped Lark, Sooty Chat, Grassland Pipit, Red-bellied Paradise-Flycatcher, Lizard Buzzard, cuckoos, weavers, scrub robins, sunbirds, and others. It is just a 20-minute walk from the Mabamba landing site, which is approximately 2 km away.

Although Nkima forest is not as large as Mabira forest, it will provide you with a worthwhile forest birding experience in addition to your water and field birding at Mabamba wetlands. Nkima forest is included in a day of birding the Mabamba wetlands and their surroundings to increase the diversity of the bird list’s forest species. The Nkima forest will surprise you with some unique forest features that are difficult to find in larger forests. By the dense undergrowth, you can tell that it is a new forest.

The Nkima Forest Lodge at the top of the hill is the starting point for birding in Nkima Forest, where numerous trails lead into the forest’s interior. Starting in the lodge’s clearing is a good idea because you can spot several species of fruiting and flowering trees and shrubs at the forest’s edge. It’s hard to miss the Green Sunbird, Grey-headed Nigrofinch, and Weyn’s Weaver in this area. More birds, such as cuckoos, hornbills, bee-eaters, wattle-eyes, and others, can be seen higher up in the tall tree canopies.

After walking through the grassy clearing at the top of the hill, you can enter the forest interior to look for specials. The White-tailed Flufftail, a shy but vocal bird, is at the top of the list, and Nkima Forest almost certainly provides you with sightings (it appears to be playing its call). Other species you might see in the interior include the Western Nicator, Red-capped Robin-chat, Tambourine Dove, Scally Francolin, and others. In addition to birds, the Nkima forest is full of monkeys, squirrels, bush babies, and others.

Where to Stay in Mabamba Swamp?

The only decent place to stay in or near Mabamba is the Nkima Forest Lodge. In the heart of the Nkima forest, with a view of the Mabamba wetland and Lake Victoria in the distance, this lodge is a nice midrange (3-star) property. On top of the hill is the main house, which also has a restaurant, a lounge, and a library. It’s a nice place to relax and watch the forest. 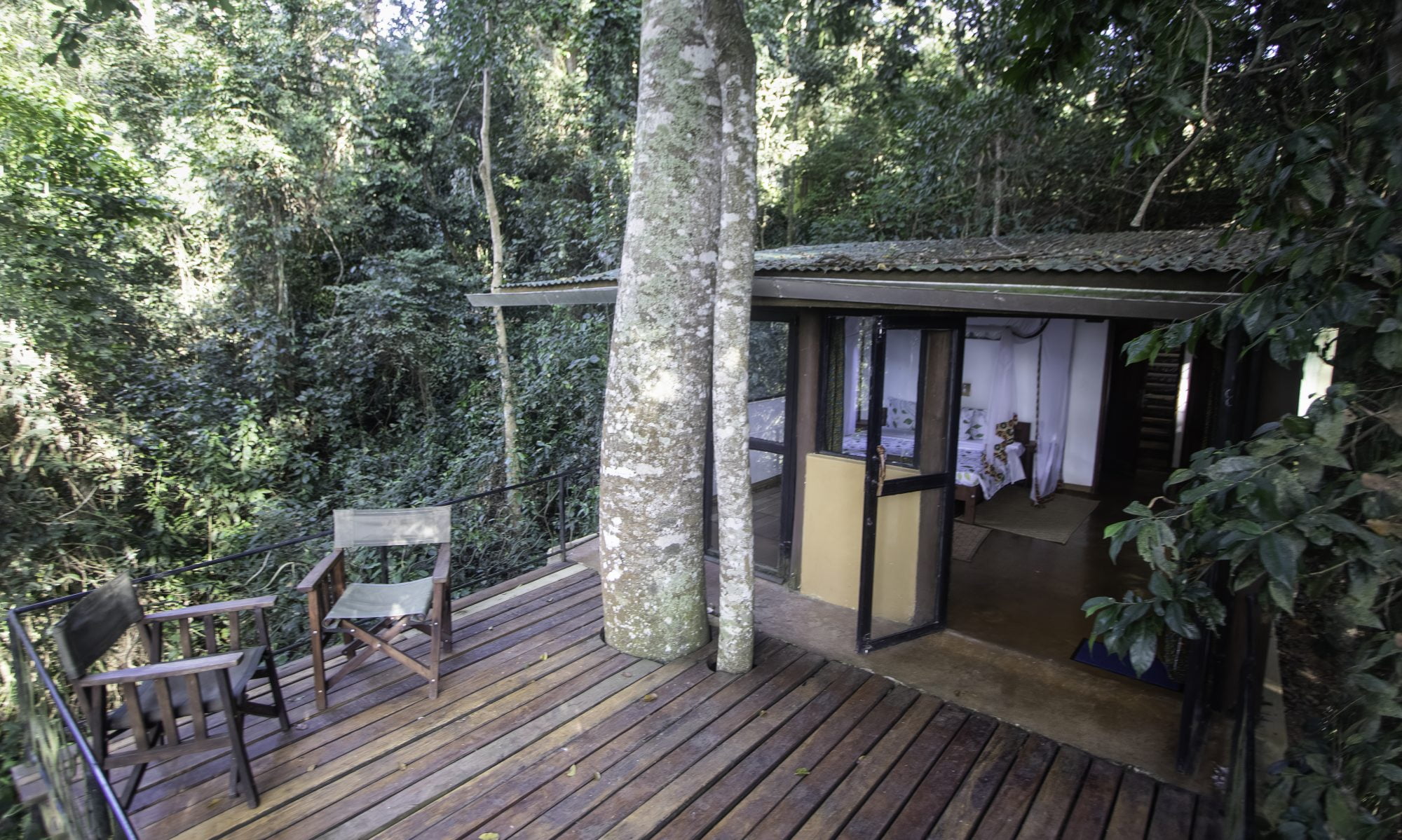 The lodge has eight cottages that are well-placed down the hill in various parts of the interior of the forest. The cottages are self-contained, have beautiful furnishings, and are spacious. From the comfort of your lodge, you can observe monkeys swinging by, squirrels, birds, and other forest inhabitants. They have a deck where you can sit and enjoy views of the forest.

The lodge also has a deck high up in the forest where you can relax and enjoy near-eye-level views of birds and monkeys as well as partial views of Lake Victoria in the distance through the trees.

This is a nice getaway near Entebbe for nature lovers. This lodge is a great place to stay near Entebbe if you want to start your birding trip in Uganda in Mabamba and Nkima Forest.